Ever since humans figured out how to boil water, we have been eating soup which has been happening for about 20 000 years. Its’ humble beginnings saw soup being prepared in animal bladders and clay pots.
Soup was often view as food for the poor as its emtymology suggests as the French “soupe” refers to broth and its Latin “suppa” being bread soaked with broth. The Germanic “sop” is still used today as we often will take a piece of bread to “sop” up the remaining juices or sauces on our plates.
The French working class often ate restoratives which was an inexpensive soup, sold as street food from vendors. These restoratives were believed to restore the physical conditions and ailments impacted by hard physical labour. In the mid 1700’s a business was opened up in France that specialized in making restoratives which began the modern word restaurant.
The arrival of autumn is the perfect time to heat up your home using the hearth and making a pot of soup to naturally restore yourself. The following recipe utilizes ingredients made entirely from our garden harvest which is a must to do before frost begins to take its toll.

Method:
Preheat oven to 375 degrees F (190 degrees C). Line a large baking sheet with aluminum foil.
Coarsely chop the squash into cubes and place it in a large bowl. Add the cooking oil and a bit of salt and pepper to the chopped squash before giving it a good tossing about the bowl.
Evenly spread the squash over a parchment lined baking sheet. Cook the squash in a preheated oven at 350°f for 45 minutes; stopping to give it a stirring every 10-15 minutes.
Meanwhile cook the chopped bacon and onion in a heavy bottomed soup pot and cook over medium heat, stirring occasionally, until the bacon begins to crisp and the onions brown. Stir in the pears, garlic, and Mexican Kitchen Cartel and cook for 2-3 minutes. By now the squash should be roasted and it can be stirred into the pot. Add the chicken stock and spices. Let the soup simmer for 10-15 minutes over low heat. Carefully puree the soup with an immersion blender. Serve immediately with a dollop of sour cream or butter and fresh baked warm bread.
If you choose you may want to cook off several strips of bacon to be served with the soup as a dipper or crumbled and served atop the sour cream. 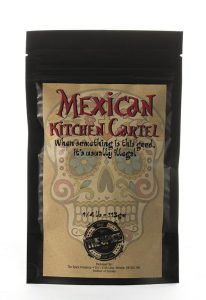