Cauliflower is a variety of the common cabbage that has begun to produce flower buds but stops growing and never produces a flower. This occurrence of the plant to stop growing at the bud stage was first observed in the 17th century and was considered an oddity until a few farmers selectively bred this descendant of the wild cabbage until they successfully created the cauliflower as we know it today.

We often refer to the bulbous flower portion of a cauliflower as the head, as in pick up a head of cauliflower for dinner, but it is properly referred to as the curd. At the base of the curd is a ring of ribbed, coarse green leaves that protect the curd from sunlight while it is growing. These leaves stop the curd from developing any chlorophyll which turns vegetables green, promoting cauliflowers brilliant white display. These larger leaves are usually removed before going to market. There is a smaller ring of leaves that are left on the curd which are quite tender and edible. Further selective breeding has also produced cauliflowers that are light green and purple colors. Many people typically discard the stems, core and leaves while preparing cauliflower and eat only the florets in raw, steamed or boiled preparations. Although this may seem like a practical approach in preparing cauliflower it is wasteful as the entire plant is edible and although the stems and core have a slightly stronger taste compared to the flowers they contain a significantly higher concentration of vitamin C and iron. Look for tightly formed curds that have small florets t and are vibrant in color without spots or discoloration. The leaves should be crisp and green, and are a sure sign to tell how fresh the curd is as the leaves begin to wilt and yellow within a couple of days after they have been harvested. Store your cauliflower in the refrigerator tightly wrapped in plastic or in a sealed container for up to 5 days. Cauliflower is best after a week or two without rain before it is harvested so keep your eyes on the weather and produce section in the and try cooking your curd whole on the barbecue using the following recipe.

Juice of one lemon

1 tbsp. Curry in a Hurry

Trim the cauliflower curd of its leaves and cut a large X into the bottom of the stem so that its core will cook more quickly. In a large stainless steel bowl, stir together the lemon juice; Curry in a Hurry and oil to format a paste. Place the curd in the bowl and evenly coat it with the seasoned oil. Next transfer the curd core side down onto a large piece of aluminum foil and wrap the foil around it so that the foil bunches up around the top of the curd. This will allow the cauliflower to cook inside the foil without dripping out any of the oil. Cook the cauliflower in a preheated oven or barbecue for 30 minutes at 425f. Let the foil cool before un-wrapping the curd. Season with salt and pepper and serve whole or cut into wedges. Yogurt makes for a great topping for this dish. 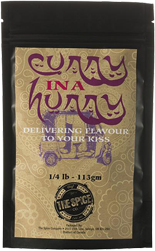 Curry in a Hurry from The Spice Co. naturally…